This past spring I published an article on Hoccleve and affect in an essay collection, Medieval Affect, Feeling, and Emotion, which I co-edited with Glenn Burger (https://www.cambridge.org/core/books/medieval-affect-feeling-and-emotion/B5457472E6BF5647D4C32D7717C2D392). I did much of the research and writing for the essay about four or five years ago—academic editing and publishing are slow, no joke. So, as I’m revving up for a new book project, Feminism Without Gender in Late Medieval Literature, I’m working with that article, and I’m reviewing much of the criticism I read and catching up on work that has recently appeared.

Why return to Hoccleve for a book that will be about feminist subjectivity in late Middle English Literature? Two reasons: gender and affect, the first of which I will say a little bit about today. Hoccleve’s poetry (and I’ve been rereading all of it) holds interest for scholars because it marks the emergence of a new form of writing, and a new form of subjectivity: with his autobiographical intensity, Hoccleve expresses the challenges of living in a world that is urban, contingent, and organized by patronage. He’s a bureaucrat, a clerk, and a nobody. And yet he airs wrenching, sometimes awkward reflections on what it feels like to be in his position. Hoccleve frequently overshares, and he often expresses the emotional difficulties of being overlooked and underappreciated in his modernity. In an argument that I continue to learn from, Isabel Davis traces the connection between labor and masculinity in the Series, focusing on how Hoccleve’s clerical identity inflects his attitudes toward writing as well as women.[1]Equally groundbreaking, Ethan Knapp argues that Hoccleve’s selfhood emerges from his bureaucratic position in early fifteenth-century London, and, most important for me at least, he traces the vulnerability of Hoccleve’s subjectivity as it emerges from the poet’s daily work at the Privy Seal.[2]As crucial and lasting as these arguments are—and I hope to build upon their enduring insights—both also show very clearly what I’ll be arguing is the poverty of gender, at least as we’ve come to use that category in historicist practice. Taken together, Davis and Knapp affirm that Hoccleve’s subject position as a man in his society amounts to (because it emerges from) the social particularities of his daily labors.

Hoccleve’s daily labors produce what I can only call a “sad bastard masculinity.” Even those scholars who focus on recovering Hoccleve as a poet—most helpfully David Lawton and Bobby Meyer-Lee—end up showing that Hoccleve takes on modesty (or “dullness,” in Lawton’s invaluable characterization) as a topos, and that his status as a beggar (in Meyer-Lee’s helpful analysis) is deployed in a move to gain patronage within the very unstable power-networks organizing Lancastrian England.[3]Once again, and as I hope to show in my book, I am deeply indebted to these arguments for their willingness to take Hoccleve’s lack of power seriously as a creative engine in its own right. Nevertheless, because these arguments explain the constitutive force of Hoccleve’s lack of power within a historicist framework that privileges power and its agents, it is hard to see Hoccleve’s identity as poet (or a man) as anything but a notable failure. I think Sarah Tolmie is right when she complains that Hoccleve “has become a prisoner of context,” though again, her commitment to tracing Hoccleve’s poetic identity through the lens of his specific historical situation does not yield anything close to the subjectivity that Hoccleve manages to construct on his own.[4]In rereading Hoccleve for the past couple of months, I am struck by how un-dull Hoccleve is. He combines genres, he breaks frames, and, most of all, he talks about topics that are simply off-limits for most prince pleasers of his day.

To be sure, scholars have traced Hoccleve’s literary debts to Boethian stoicism, to penitential literatures, to representations of mental illness, and to specific authors (Isidore of Seville and Henry Suso).[5]What emerges from most if not all of these analyses, for me, is how inapposite most of these models are if we think of them in terms of influence. Hoccleve knew his sources, I’m convinced, but I’m also increasingly of the mind that he tweaks these sources to create a new poetic subjectivity, one that supersedes the model of gendered selfhood that he’s been assigned. Rather than the sad-bastard masculinity that historicist analysis yields, Hoccleve’s representation of himself as vulnerable, as powerless in a world of the powerful, is a reorganization of selfhood that produces a different model of poetic identity. I will have more to say about this reorganization and this identity in coming days, but in closing I want to suggest that it is our reliance on gender as an underlying social construct—as, in Joan W. Scott’s influential articulation, “[a category that] does not have the analytic power to address (and change) existing historical paradigms” (1057)—that causes readings that lock Hoccleve into a static subjectivity, even among non-gender critics.[6]If gender is just another way of describing social conditions, then we are left with no way of analyzing how different people, much less different poets, use the specificity of their daily labors to create something unexpected. More soon on the something unexpected in Hoccleve’s Series… 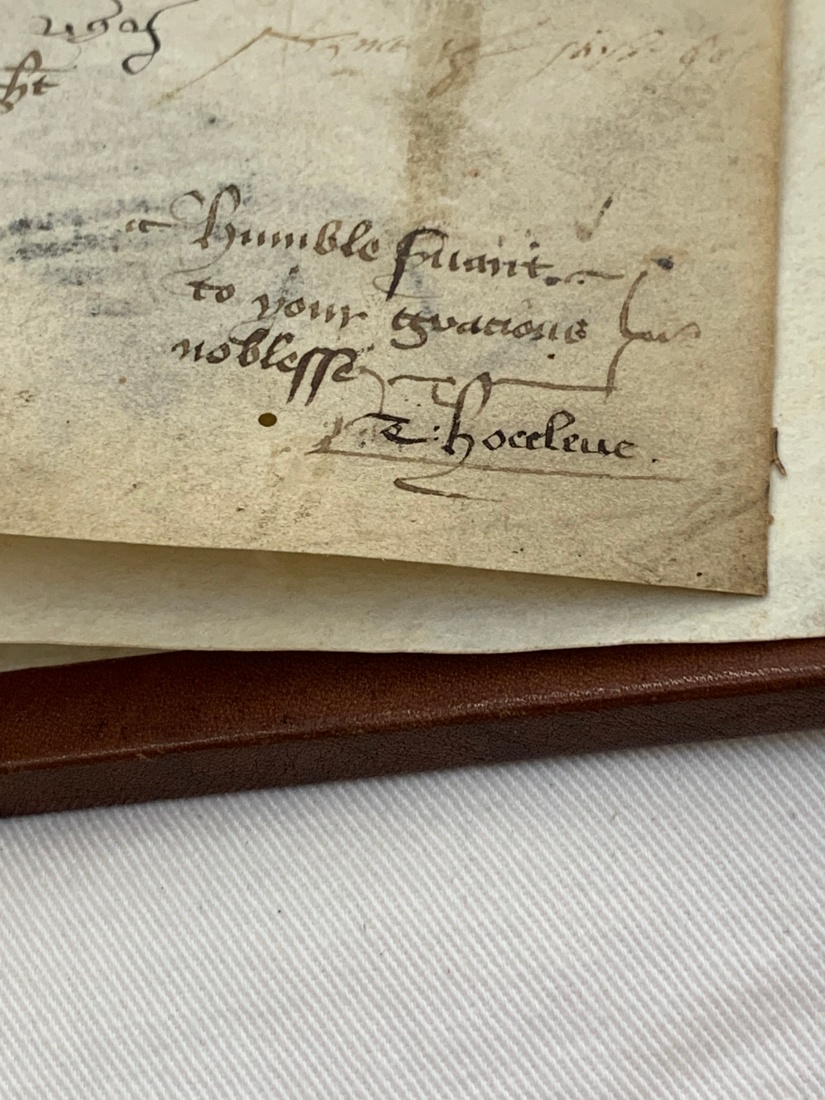 [5]This is a long catalogue. I will do right by these scholars by and by.

View all posts by hollyacrocker

3 thoughts on “Hoccleve, the Series, and Sad-Bastard Masculinity”